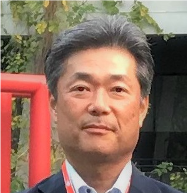 Dr. Hiroshi Suzuki is the General Manager of the Technology Innovation Division of Hitachi High-Tech (HHT) headquarters in Tokyo and is responsible for the technology strategy of the HHT group.

He joined Central Research laboratory (CRL), Hitachi Ltd. in 1989, and researched electron-beam instruments for improving yields of semi-conductor and/or magnetic devices. He developed several methods and apparatuses to characterize the electrical properties of LSIs and to analyze the magnetic properties of several magnetic devices used in HDDs. He received academic awards including the Technology Development Award (JIM, 1999) and the Technology Award (JSPE, 2003). As a part of his carrier in Hitachi, he worked in research planning at CRL for several years, and he was temporary transferred to the corporate venture capital (CVC) of Hitachi’s R&D division from 2004 to 2005.

He moved to Hitachi High-Technologies Corporation in 2011, where he was in charge of R&D planning and strategy, and he was temporary transferred to the HHT’s subsidiary company to develop new technologies for inspection of social infrastructure from 2016 to 2018.

« Back to Industrial Advisory Board