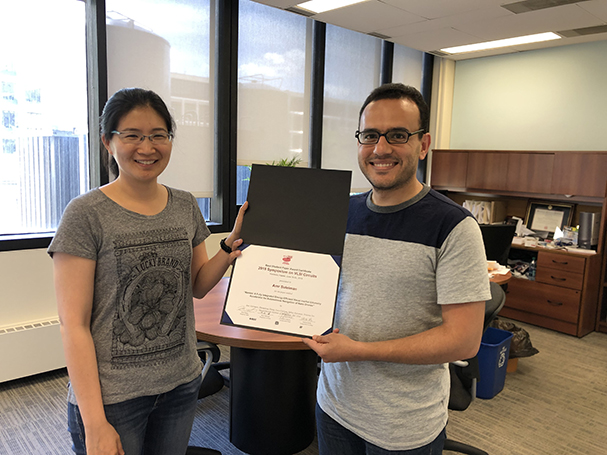 Amr Suleiman, a graduate student in Vivienne Sze's group, received the Best Student Paper Award at the 2019 IEEE Symposium on VLSI Circuits for his paper on "Navion: A Fully Integrated Energy-Efficient Visual-Inertial Odometry Accelerator for Autonomous Navigation of Nano Drones" (published in 2018). Award recipients are selected based on the quality of their written papers and the quality of their presentations at the Symposia.

The paper presents Navion, an energy-efficient accelerator for visual-inertial odometry (VIO) that enables autonomous navigation of miniaturized robots (e.g., nano drones), and virtual/augmented reality on portable devices. The chip uses inertial measurements and mono/stereo images to estimate the drone’s trajectory and a 3D map of the environment. This estimate is obtained by running a state-of-the-art algorithm based on non-linear factor graph optimization, which requires large irregularly structured memories and heterogeneous computation flow. To reduce the energy consumption and footprint, the entire VIO system is fully integrated on chip to eliminate costly off-chip processing and storage by exploiting compression and both structured and unstructured sparsity. To the best of their knowledge, this is the first fully integrated VIO system in an ASIC. This research was performed in the Energy-Efficient Multimedia Systems Group in collaboration with graduate student Zhengdong Zhang, as well as professors Luca Carlone and Sertac Karaman in the AeroAstro department.

For more info about the paper, please visit http://navion.mit.edu/.
Navion was also highlighted in Amr's thesis defense, which is available as part of the MTL seminar series at https://www.mtl.mit.edu/seminars/energy-efficient-accelerators-autonomous-navigation-miniaturized-robots