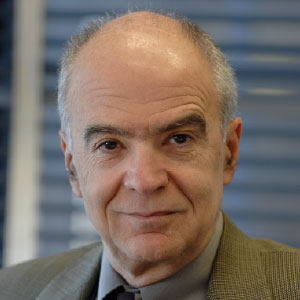 Prof. Dimitri A. Antoniadis is a native of Athens, Greece. He received his B.S. in Physics from the National University of Athens in 1970 and his Ph.D. in Electrical Engineering in 1976 from Stanford University. He joined the MIT EECS faculty in 1978 and currently he holds the Ray and Maria Stata chair in Electrical Engineering. He is well known for seminal contributions to field-effect devices and to silicon process modeling.

His present research focuses on the physics, technology, and modeling of nano-scale devices in Si, Si/SiGe, and III-V materials for CMOS applications. He was the founding Director of the Microsystems Technology Laboratories at MIT. Currently, he is the Director of the multi-university (US) Focus Research Center for Materials Structures and Devices centered at MIT. Prof. Antoniadis is Fellow of the IEEE, and member of the National Academy of Engineering. He has received the Solid State Science and Technology Young Author Award of the Electrochemical Society in 1979, the Paul Rappaport Award of the IEEE in 1998, the Andrew S. Grove Award of the IEEE in 2002, the 2004 University Researcher Award of the Semiconductor Industry Association, and the 2004 George E. Smith Award of the IEEE.